These are the last of the photos I took from the Houston International Quilt Show.  I have added them in gallery style for your viewing pleasure; there are 28 total photos.  Each one is a truly an amazing piece of art.  In many cases I have only shown a portion of the quilt, in order to keep each in a square photo format.  You may click on any quilt photo to view it in a larger format.  Enjoy!! 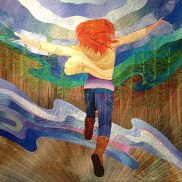 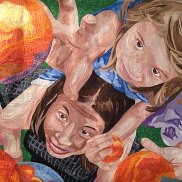 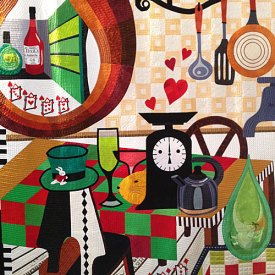 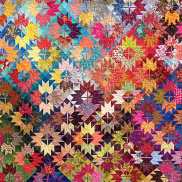 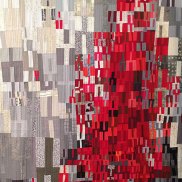 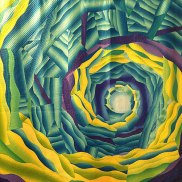 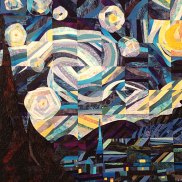 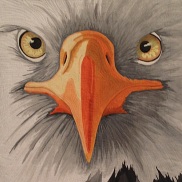 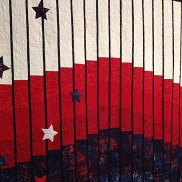 All the Presidents’ Dogs

The trip last weekend to the Houston International Quilt Festival was a feast for the eyes.  This year the festival had a special “Raining Cats & Dogs” competition category.   I wanted to share these amazing quilts with you.  Enjoy your trip through this virtual art gallery!  And if you have a favorite, do comment and let me know.  They are all so wonderful!

This post is part of a Wednesday blog hop. Please click the “Blog Paws” button in the sidebar to follow all the other wonderful pet blogs. Happy Blogging!

I urged my cousin’s cat, Taz, to come to the kitchen sink to drink, and she obliged as I captured her in this funny pose.

Kool in Ketchikan was inspired by a photograph I took of two dogs – both wearing upside down sunglasses, perched in an open window of the Bayside building in Ketchikan, Alaska.  It was drizzling, I looked up and there they were.  The pit bull mix dogs, mostly white with black spots, are iconic to Ketchikan, both to locals and tourists.  I wanted a playful reminder of our visit to Ketchikan, consequently one dog is pink and the other dog is blue.  It literally rains and pours at our local shelter with pit bull mix dogs.  Won’t you please consider offering a “forever” home to a dog from your local shelter?  We did.  His name is Yuba.  He, too, is part pit bull and a big love.

In August of 2008, my son found a tiny kitten under the hood of the car, covered in grease and fleas.  He cleaned her up and she won his heart, as well as the scorn of our other two cats.  Boris, the black cat, is determined to be Alpha male, and is also proud of his prowess at catching (catnip) mice, while Moose, the orange cat, is the might hunter of lizards and bugs, who’s afraid of everything.  Oslo the kitten sleeps, dreaming, no doubt of how best to annoy her big brothers.

This quilt was made from a snapshot of my weimaraner, Charlie.  He is lying at the foot of my bed waiting for his daddy to get home from work to play with his ball. 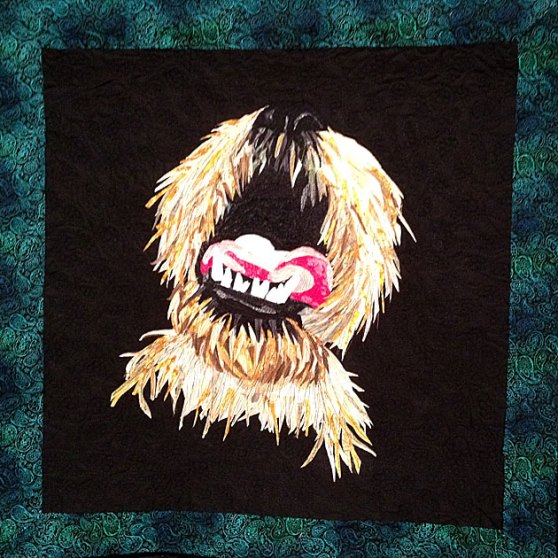 The inspiration for creating this Yogi Bear quilt came from a special love I had for my pet, a shelter dog we rescued at 16 weeks old.  Yogi had the most adorable face that peeked out from his cage.  I felt it best highlighted his unique character.  Everyone who was him commented on his unique look.  Yogi Bear was only with us for a short five years.  Making this quilt has helped me to deal with the loss of Yogi.

After creating a collage on a playing card, manipulating it in Photoshop in a class by Red-Dog Enterprises, my pup was printed by a large format printer onto fabric.  I pieced varying sized improvisational star blocks using Marcia Derse fabrics, quilted my adorable lab and stitched him to his background.  He would be at home anywhere!

Unfortunately I do not have the details for this quilt. 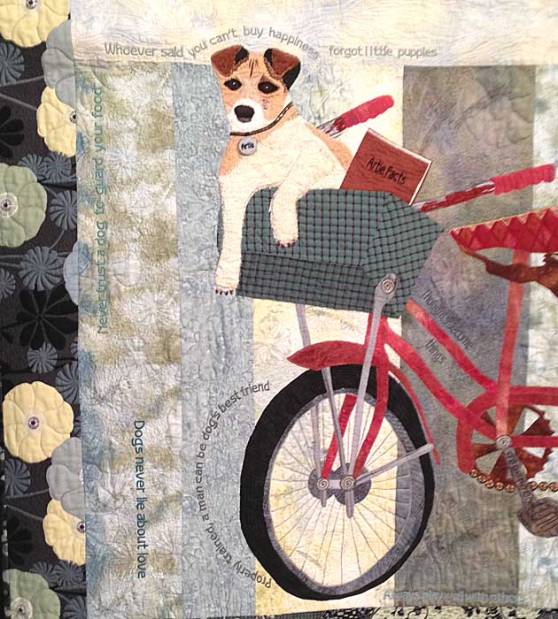 I have long known that dogs have their own set of rules and facts about how the world works.  So, when faced with a Mendocino Quilt Artists challenge to create a quilt based on the theme “Artifact,” my mind went to dog facts.  Artie is the representative of the dog world, and these are some of the known dog facts. 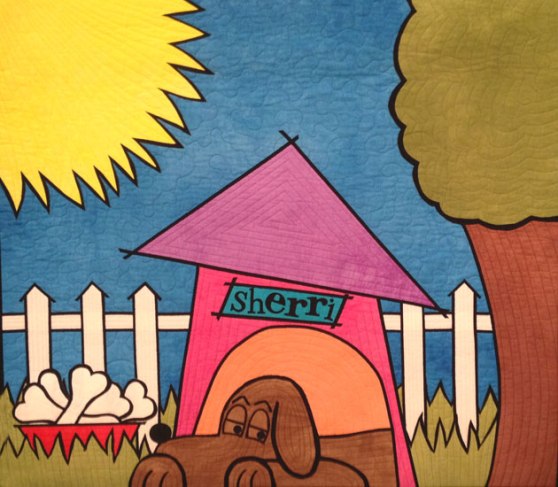 As soon as I found ou about the “It’s Raining Cats and Dogs” special exhibit, I sat down and sketched out this quilt.  The pup on the quilt is keeping a wakeful eye out for any bone thieves!

A friend’s dog had the habit of lying on the back of the couch and watching me while I stayed with them.  Fortunately, I had my camera and transferred the photo to polyester using disperse dye digital transfer.

I began this quilt in a class taught by June Jaeger in Sisters, Oregon,  It’s from a photo of my dog, Shade, when he was a puppy.  I wanted a small dog.  He was 19 pounds at the time.  He grew up…now he’s 80 pounds.  While his name may be Shade, he brings a lot of sunshine into my life.

I found myself on a familiar road this weekend, traveling to Houston.  I have lived in both Austin and Houston for many years of my life.  This weekend, however, found me specifically going to Houston to attend the International Quilt Festival at the George R. Brown Convention Center in downtown Houston.

Traffic was heavy in Houston even around the noon hour on Friday when I arrived.  I enjoyed traveling through most of downtown driving behind a 1960’s 220S Mercedes-Benz, although I felt sorry for the guy driving because it was a stick shift, with almost solid stop and go traffic!  It did, however, let me pretend to maybe be traveling in Europe rather than in Houston.

The hotel I stayed in, the Westin Houston Downtown, was exceptionally nice!  Clearly I am not accustomed to such luxury, because I got pretty excited over the amenities, including a bathrobe, lighted makeup mirror, waterfall shower, and a REALLY nicely detailed room.  Sumptuous!!  I can definitely recommend this place if you are ever in the downtown Houston area.  It is conveniently located near both the convention center and Minute Maid ballpark, and other downtown attractions.

The George Brown Convention Center is simply HUGE.  A friend at work told me that her daughter was there once for a volleyball tournament, and that this building holds 100 volleyball courts.  After seeing the inside, I can believe it.  One end held the food court, then about a million retail booths (mostly related to quilting of course), and then there was the quilt show at the other far end of the building.  Thankfully many, many chairs were located along the lengths of the walls for a place to rest weary feet.

Enjoy the photos.  I will be posting more of the beautiful quilts during the week.  Just too many for one post!